If Mike comes true for us we will winn the Presidency.

We are going to walk to the Capitol. I’ll be with you.

7 million more votes, it was a fair election.

At least 13 senators say it was un unfair election, certification is impossible.

The 82 year old hands that picked cotton for somebody else, choose now her youngest son to be the first black senator for Georgia.

Sorry, I have to do my job.

The voters, the judges, the states, they have all spoken. If we overrule them we overrule democracy.

What the hell is this?

The Capitol is being invaded.

They are standing on the balconies!

They break through windows!

The people of Congress are in hiding!

Do they have weapons?

The VP is evacuated.

Armed standoff at the door of the House floor.

There have been shots, one woman is injured.

I call on president Trump to go on national television and fullfill his duties.

It is time to go home, we love you.

He still refuses to say he lost a democratic election.

Let’s declare that this is the end of something.

What will the Republican Party do now?

Success has many fathers, faillure just one: it all leads back to the President of the United States.

We go continue and do our business.

Meanwhile: 3.775 deaths because of the pandemic. 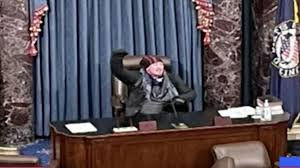